Showing posts from June, 2012
Show All

- June 09, 2012
A while back I discovered my GG grandmother Mary KENNEDY [nee MCCOOK] had been in gaol a few times.  This led me to wonder about whether or not she may have had a 'mug shot' taken at any time.  This in turn led me to searching on the net for 19th century mug shots. I found a few fantastic ones taken here in New Zealand and on the Police Museum's website These are so intensely interesting when considering the 'bigger picture'.  Thinking about what they were charged with, how they were dressed, the pose they were made to take in the photo, what caused them to get to that circumstance. I must get around to finding out if my Mary KENNEDY had a mug shot.... Here are some more links to historical mugshots: Criminal faces of North Shields - the men  [England] Criminal faces of North Shields - the women  [England] Faces of crime gone by [England] Mugshots archived [Flickr group - worldwide, includes photos in previous links] ©2012 Magna_Quies.com
1 comment
Read more 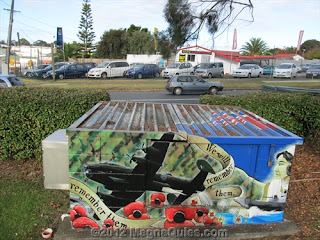 A lovely day today and so took the opportunity to head to Waikumete Cemetery  for a spot of photography - of course it's never just a 'spot' with me is it *grin* no, so this trip ended up with another 500 photographs to edit and work through 250 biographies of those graves.  I take 2 photos per grave.  One from a distance and one of the headstone close up. Here is my Waikumete cemetery group on Flickr . My partner happened upon a box covering a utility of some sort.  Maybe a small pumphouse or electricity housing.  Auckland has this very awesome habit of beautifying these things and they generally have a theme of the area they are in.  The one in Waikumete Cemetery is in the military section and so that was it's theme. Another decorated utility box outside William Maxwell cemetery I have photographed is  here  and a random street utility box is here ©2012 Magna_Quies.com
2 comments
Location: Opposite 4155 Great North Rd, Auckland 0602, New Zealand
Read more
More posts